We need your support in our IndieGoGo crowdfunding campaign! Only 14 Days Left!!

Inertia are due to perform a series of shows in the USA this year but we need help raising the start up funds for the tour..  which are quite immense for an independent band.. So we have found a fun way of doing this!

We have released a number of excellent Inertia items for sale.. including:-

- Autographed CD's
- Exclusive Posters, Pins/badges and stickers
- An Exclusive Inertia remix album "The Blood Mixes", which will ONLY be available on this campaign
- Inertia Universal Blood Tour T-Shirt 2013!
- The FULL Inertia catalogue (including artwork) of 17 releases on a special Inertia branded USB Stick!
- A package of 11 Inertia CD's
- Autographed drum sticks from Inertia drummer Alexys B
- The chance to have Inertia remix your band!
- Guest List Entry and a meet, greet and photo with the band at any of the announced concerts this year

Every purchase brings us closer to our goal and we depend on the support of our followers to make these great things happen.

The lowest pledge is only $5 and every dollar moves us closer to our goal.

Thanks for your continued support.!!

Reza & Alexys
INERTIA
Posted by Cryonica at 00:45 No comments:

Help us get into the iTunes Charts

The brand new Inertia album "Universal Blood" is out on November 13th.  Help us get into the iTunes Electronic Charts by pre-ordering your copy from iTunes.

We only need about 75 pre-orders to hit the top ten and therefore make a real impact!!

Here are pre-order links for the US and UK:-


If you would like to buy it on CD, you can do so from all good stores including Amazon or buy it from our record label, Metropolis Records or directly from the band ourselves..  Links are below:-

INERTIA
Posted by Cryonica at 08:29 No comments:

Here is our brand new video for our forthcoming single "Alive":

The single comes out digitally on October 16th on Metropolis Records.

It includes remixes from Inertia, XP8, Paul Robb of Information Society, Ego Likeness and Lowlife.  It also includes an exclusive track "The Line" unavailable anywhere else!!

Posted by Cryonica at 00:35 No comments:

Choose from a range of EBM/Industrial/Darkwave titles.. Including Inertia & Spahn Ranch..! 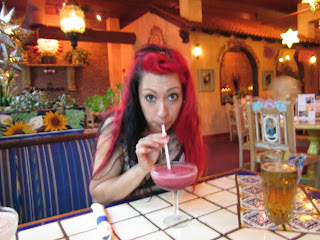 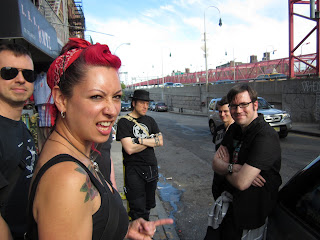 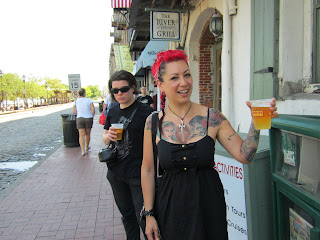 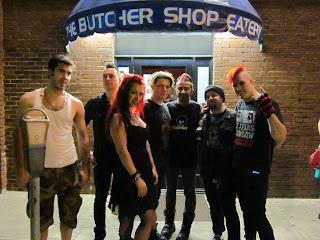 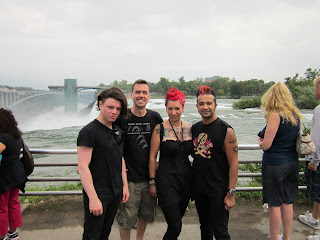 Posted by Cryonica at 13:03 No comments:

So, we arrived in New York on the 23rd August.. stayed 2 days in Long Island City in preparation, met up with our guitarist for this tour, Gabriel Shaw from Boston.  Then we got extremely drunk in a Cafe 31 opposite Madison Square Garden.  Crazy thing is we only popped in there for a drink after walking about half Manhattan island that day!

Started off with Myself, Alexys and Andrew.. then we were joined by Xian from the band Eisdrive and his wife, then Athan (our booking agent and singer from Spahn Ranch/Black tape for a blue girl) and Gabe.. we got trashed!!

Next morning for our first show in Pittsburgh, we took the 7 hour drive West and had a great gig at the 31st Street pub!
Much thanks to Jim Semonik, who put the show on and was extremely welcoming.  Noitekk band, Die Sektor were also on the bill.

At this point we are hearing rumours of Hurricane Irene hitting the East Coast..  we watch the news and check out the potential areas to be hit and GREAT. it is to hit all the cities on our tour!

Anyway.. we take the 10 hour drive to Providence, Rhode Island.  Get there.. we a have a nice hotel and the venue is stlll setting up..  no stage, but adequate PA being set up..

We meet the Synthetic Division guys, who will be with us for he next few shows.. cool guys.

Unfortunately, this was a new venue and the crew and management have obviously never done something like this before..  The sound engineer did his best, but had no idea about sound.. period.

Gig goes ahead and we end up all playing through the in house system.. normally reserved to play background music in the pub.. not ideal, but all three bands did a kick ass job!

We are now hearing that Hurricane Irene is heading to Rhode Island, so we leave the next morning, heading North to Manchester, New Hampshire.

We also hear that our Boston show has been cancelled for Sunday, as Irene will be hitting the city that day..  sucks as this was a very important show for us.  We haven't played Boston for 9 years!!

We get to Manchester early so decide to book 2 nights in a hotel, as we now have a spare day.. plus we want to wait the storm out up here..

Gig in Manchester goes well..  excellent sets by all 3 bands, great treatment by the promoter and venue staff..

Wake up this morning and we are glad to hear that the hurricane has been downgraded to a tropical storm.

Raining consistently here now as the storm is above us.. but easy to deal with.

Another day here then next stop.. New York.

INERTIA INFO SERVICE
US TOUR DATES
We will be going on tour in the USA (East Coast) this August with the excellent BELLA MORTE.  Also on the bill are SYNTHETIC DIVISION.
We are still waiting on full date confirmation, but as they stand, they are:-
August 25th Pittsburgh, PA @ 31st Street Pub
August 26th Providence, RI @ TBA
August 27th Manchester, NH @ Milly's Tavern
August 28th Cambridge, MA @ The Middle East
August 29th NYC @ TBA
August 30th Wash, DC @ TBA
August 31st Raleigh, NC @ TBA
September 1st Savannah, GA @ Club One
INDIE GOGO CAMPAIGN & EXCLUSIVE  TRACKS
We have started an Indie GoGo (Like Kickstarter) campaign to help fund the forthcoming US Tour.  Due to low fee guarantees and high costs involved, we need a little help with the finances.
We have offered some great exclusive music, merchandise and offers in our Indie GoGo campaign.  This includes exclusive Inertia music that will NOT be available ANYWHERE ELSE apart from this campaign.
Check out the campaign and see if there is anything you like!  All monies will go directly to the tour fund!
http://www.indiegogo.com/INERTIA-East-Coast-US-Tour-Campaign
INERTIA’s LONDON FESTIVAL
We are organizing our own London Music Festival!!
Music For A Darkened Theatre is a festival organized by Reza & Alexys from Inertia.
Held at The Cochrane Theatre in London on Saturday 13th August,  the line up features In The Nursery, Zodiac Youth, Attrition, Inertia, Mechanical Cabaret, The Ghost of Lemora, Maleficent, Alter Red, Black Light Ascension.
Tickets are £13 (Limited to only 300 Tickets!).
For more info and to get tickets, check out the festival website:-
http://www.cryonica.com/darktheatrefest.htm
T-SHIRTS
Just in at INERTIA HQ are brand new “Deworlded” T-Shirts.  The shirts are available as Regular T-Shirts, Girlie Shirts and Vests.  To purchase your shirt follow the link below, shirts are priced at only £12 inc Shipping!!!
http://www.cryonica.com/tshirts.html
www.inertia.gs
Posted by Cryonica at 11:17 No comments: